TL;DR - if you are not interested in an in-depth overview of what was wrong with the game and how it was fixed, scroll down to Download section for a link and a Patreon announcement.

Today’s subject is Scarface: The World is Yours. This tie-in game to a 1983 movie Scarface was developed by Radical Entertainment and released in late 2006.

Naturally, by now you likely know where it’s going – what is wrong this time? As always, PCGamingWiki page provides an answer – at the time of writing this post, you can see the issue listed as one of the key points:

Graphics are corrupted on modern versions of Windows

This doesn’t tell much about how bad is it, so what does it look like? 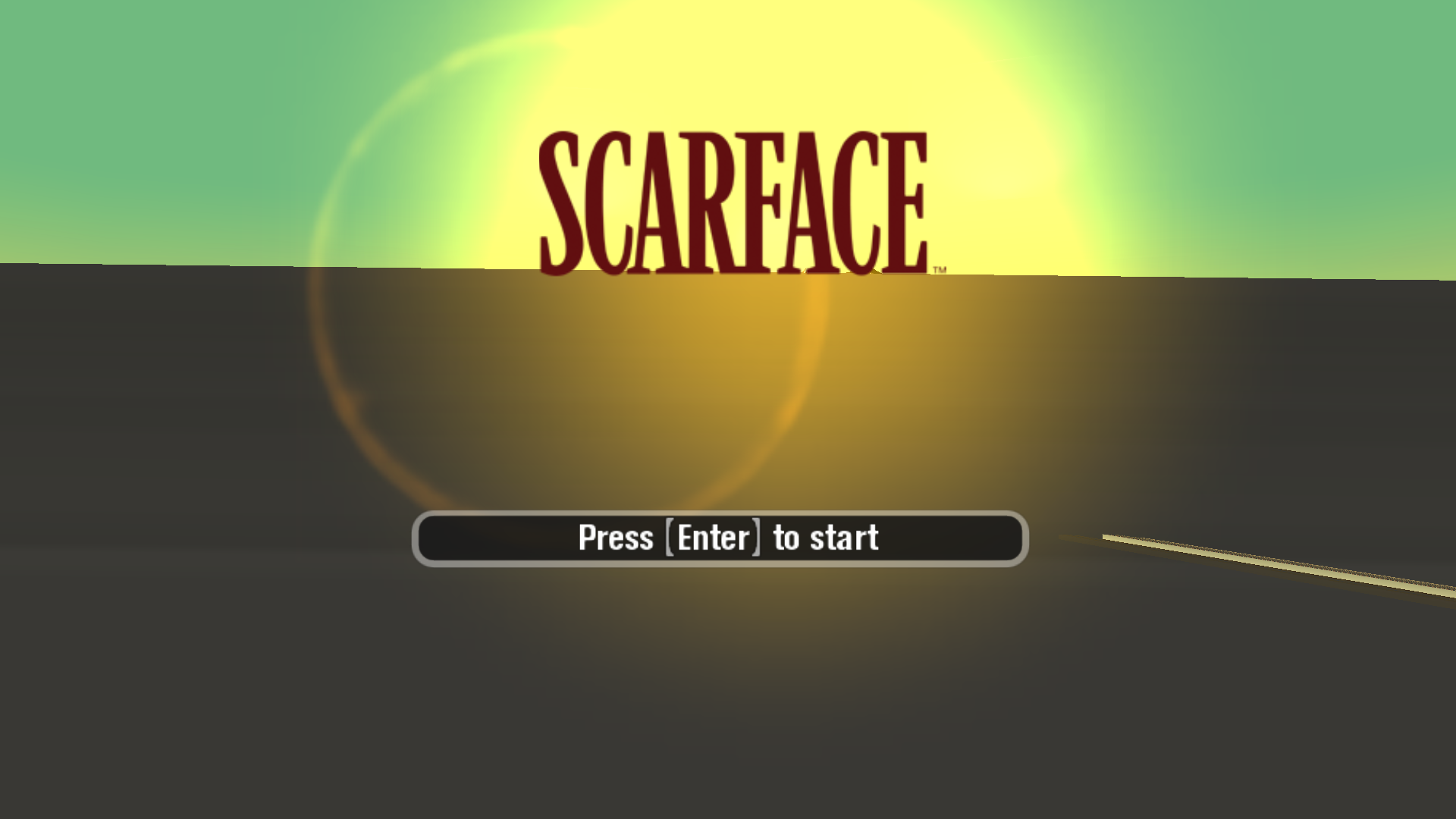 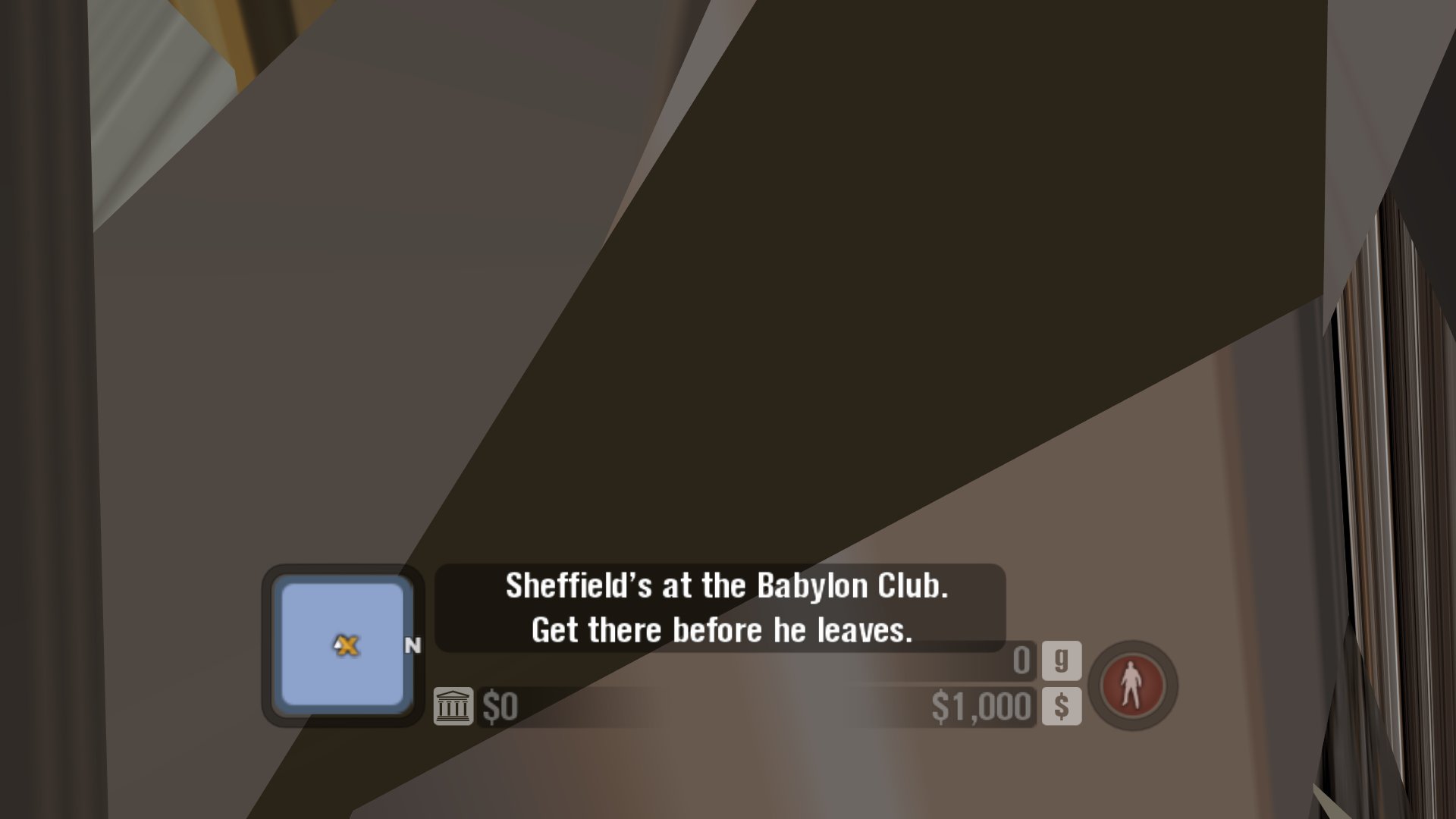 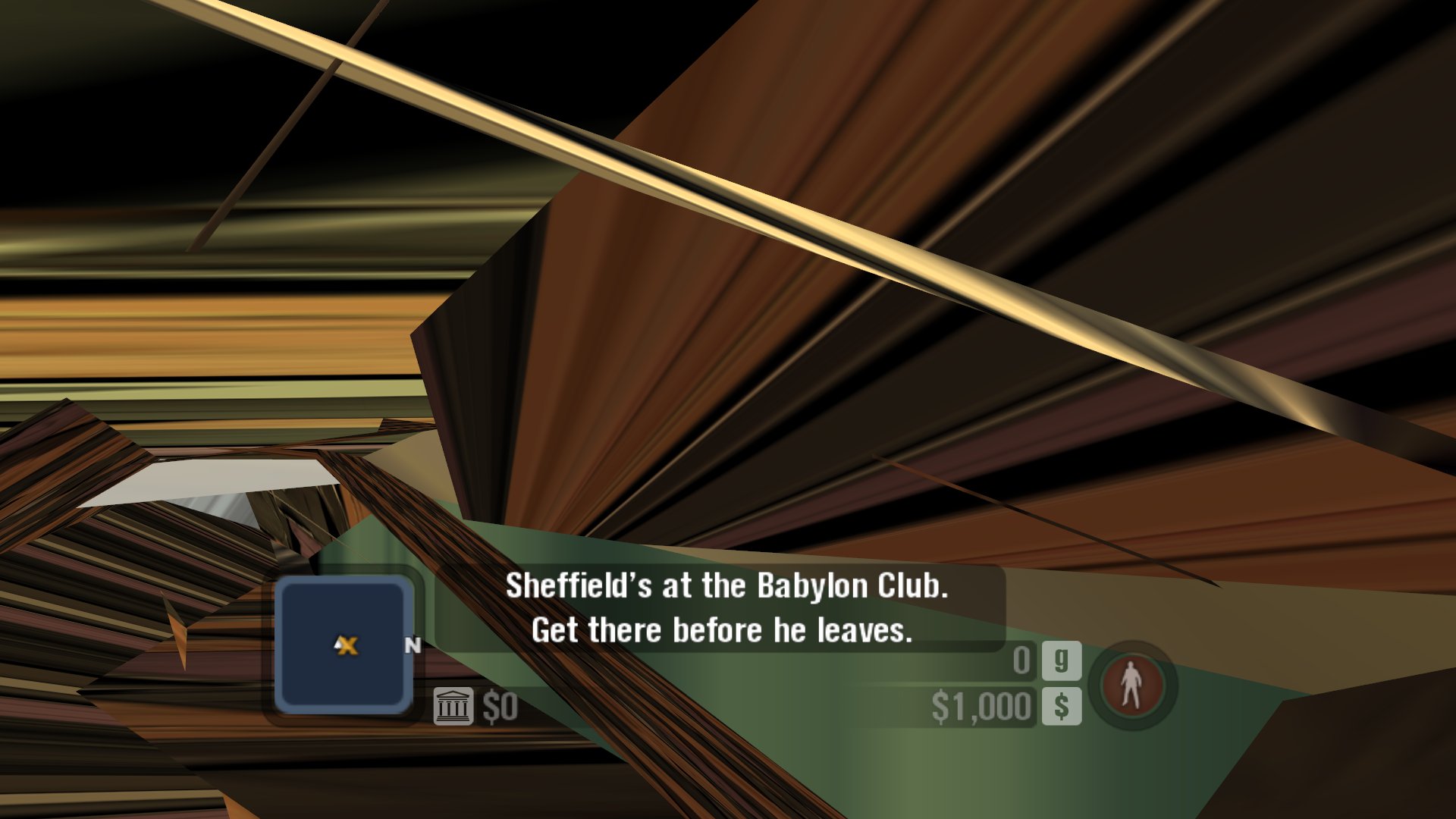 It is… very bad. While results vary across different PC’s greatly, nearly every modern PC displays this broken mess, rendering the game unplayable. Of course, community came up with workarounds, but they sadly have their drawbacks:

While these might suffice for casual play, neither of these workarounds address the root cause of the issue. However, we want to know what exactly went wrong, so those aren’t enough – armed with a debugger and a virtual machine, I can proceed to figuring this issue out.

Step one to figuring out such issues is of course attaching a debugger. This time, since the issue seems to be specific to D3D, I aided myself with DirectX Wrappers from Elisha Riedlinger. Having a minimal d3d9.dll wrapper is excellent for prototyping, since it allows me to instantly and reliably tap into game’s rendering code without any game specific hacking.

That said, this issue could really be anything. That’s where experience helps, so I was able to come up with theories by just observing how the bug looks visually:

I theoretized that this issue relates to vertex buffers not updating properly. At this point it’s worth to mention that people thought this issue shows up only on multicore CPU’s. If this is true, then it could mean that the issue is a classic race condition – which also would explain why it looks different every time. Conceptually, it also makes sense – game could be loading models on multiple threads, setting up D3D resources concurrently and I imagine that failing to do so in a thread safe manner could result in artifacts looking like that.

Let’s take another look at vertex buffer locks though. I spotted that some (not all) locks are done with a D3DLOCK_DISCARD flag. Looking at MSDN docs, it’s defined as (emphasis added by me):

The application discards all memory within the locked region. For vertex and index buffers, the entire buffer will be discarded. This option is only valid when the resource is created with dynamic usage.

Analyzing the code further though, I was not fully convinced that after discarding game always fills the entire buffer. So what if we assume the flag is added there wrongly and remove it? 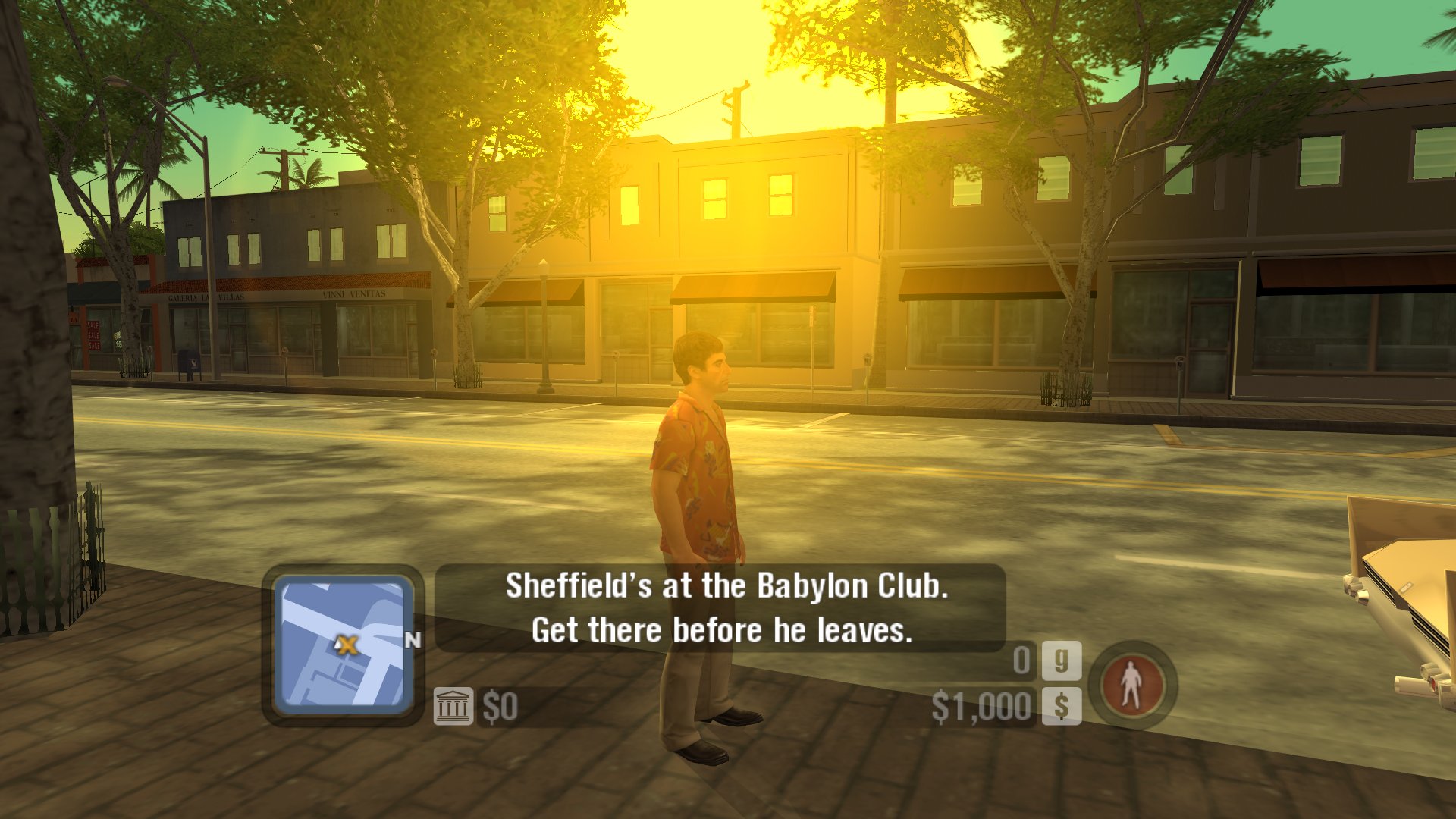 It works! It doesn’t seem to be a fluke either – the game was consistently fixed for me and several other people who tested.

A cautious reader might stop right here and ask a few questions:

With a DX9 wrapper and knowledge on when D3DLOCK_DISCARD is supposed to be used, I could come up with proof that this flag was used wrongly. In principle, you’d use this flag when locking a buffer if you did not care about the buffer’s past contents and intended to fill it with new data. If the game used this flag, but also expected the buffer to retain its old contents, then the flag was misused.

To test whether the game really cares about previous buffer contents, I deliberately filled it with garbage if the game locked it with D3DLOCK_DISCARD:

Much to my relief, the result was more or less what I expected: 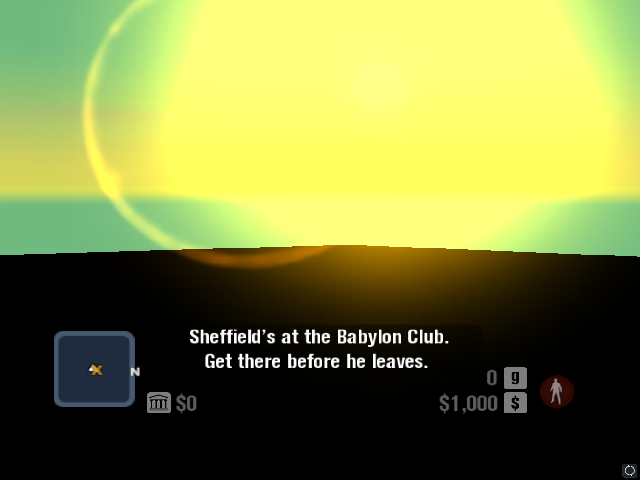 Graphics were once again broken, which proves that game locks buffers with a D3DLOCK_DISCARD flag and expects the contents not to be thrown away! For me that’s a satisfactory enough proof of API misuse, and a proof that removing this flag is not a workaround, but a correct fix.

What about PIX and dgVoodoo? The latter is a wrapper, so I can imagine it not emulating the behaviour of the discard flag. PIX on the other hand is a graphics debugger, and in order to be able to capture the frame it likely preserves past and current buffer’s contents. While I can’t prove it for certain, I wouldn’t be surprised if PIX just ignored this flag overall.

Are we done? Well…

I could technically finish here, as the most important issue has been fixed, and the game is playable. However, something was still off… 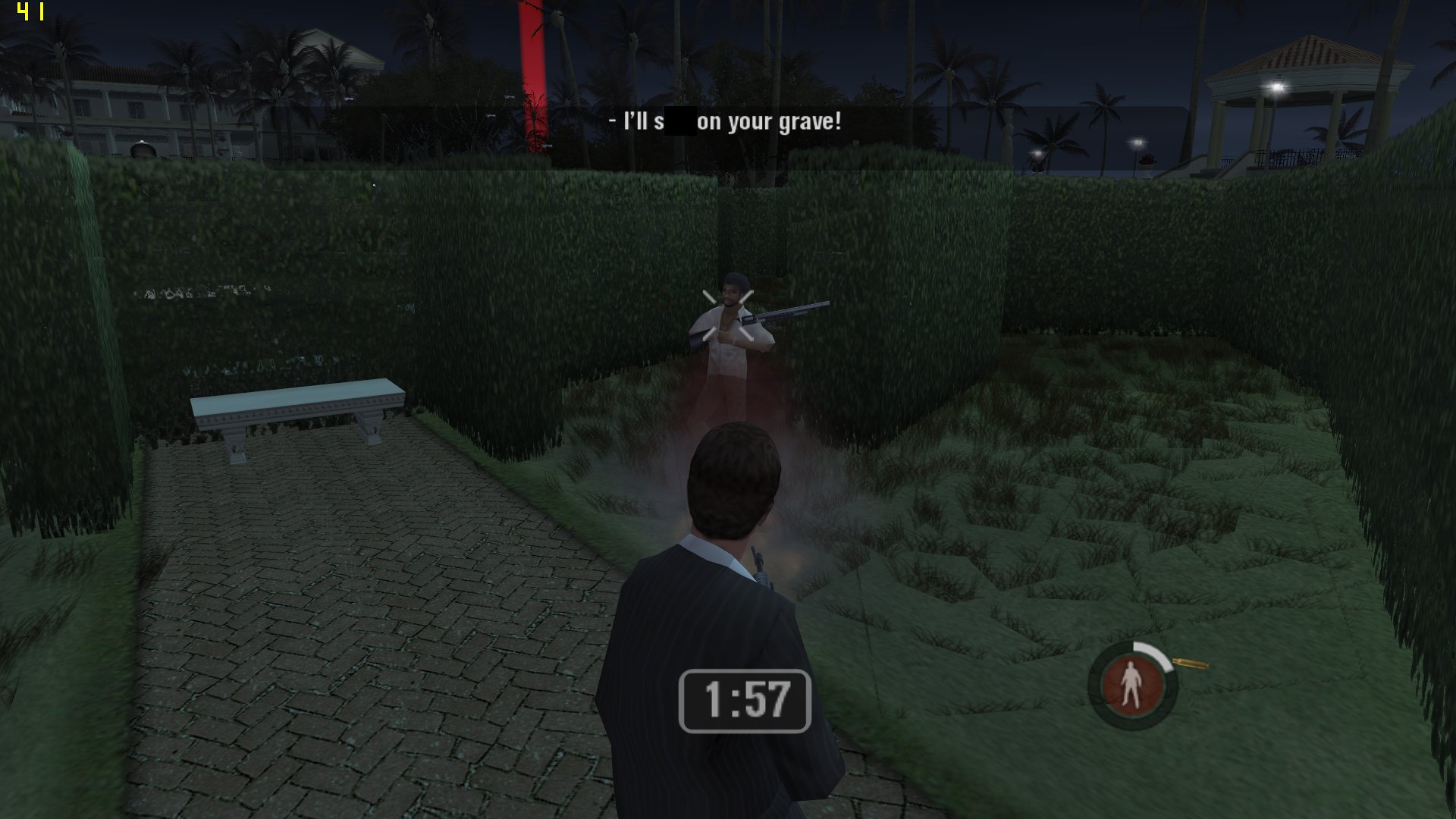 My PC is nowhere close to “bad”, yet I was unable to maintain stable 60 FPS – in the area presented on a screenshot, I in fact got consistent 40-45 FPS. To say it’s “terrible” would be an understatement.

However, looking up process affinity in Task Manager reveals something… interesting: 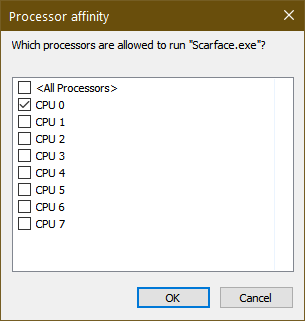 Looking into the game’s code again, it seems like the game voluntarily sets itself to run on only one core. Why? I don’t know for sure, but I theoretized that this might have been a workaround for the aforementioned graphics corruption bug. Recall that people claimed this bug occurs only on multicore CPU’s – and so I theoretized perhaps in WinXP days limiting CPU affinity to one core “fixed” this issue, and on newer systems it stopped being the case due to changes in how drivers work (eg. if WDDM drivers manage buffers out of process, then affinity settings would not affect them). It’s a very long shot, but hey – we’ve seen this before already.

Remove this code so game runs on all cores, and sure enough – it’s smooth as butter now. It also does not seem to have any visible race conditions (which could have been “hidden” by setting CPU affinity), because people tested it for hours and encountered no crashes or new bugs. 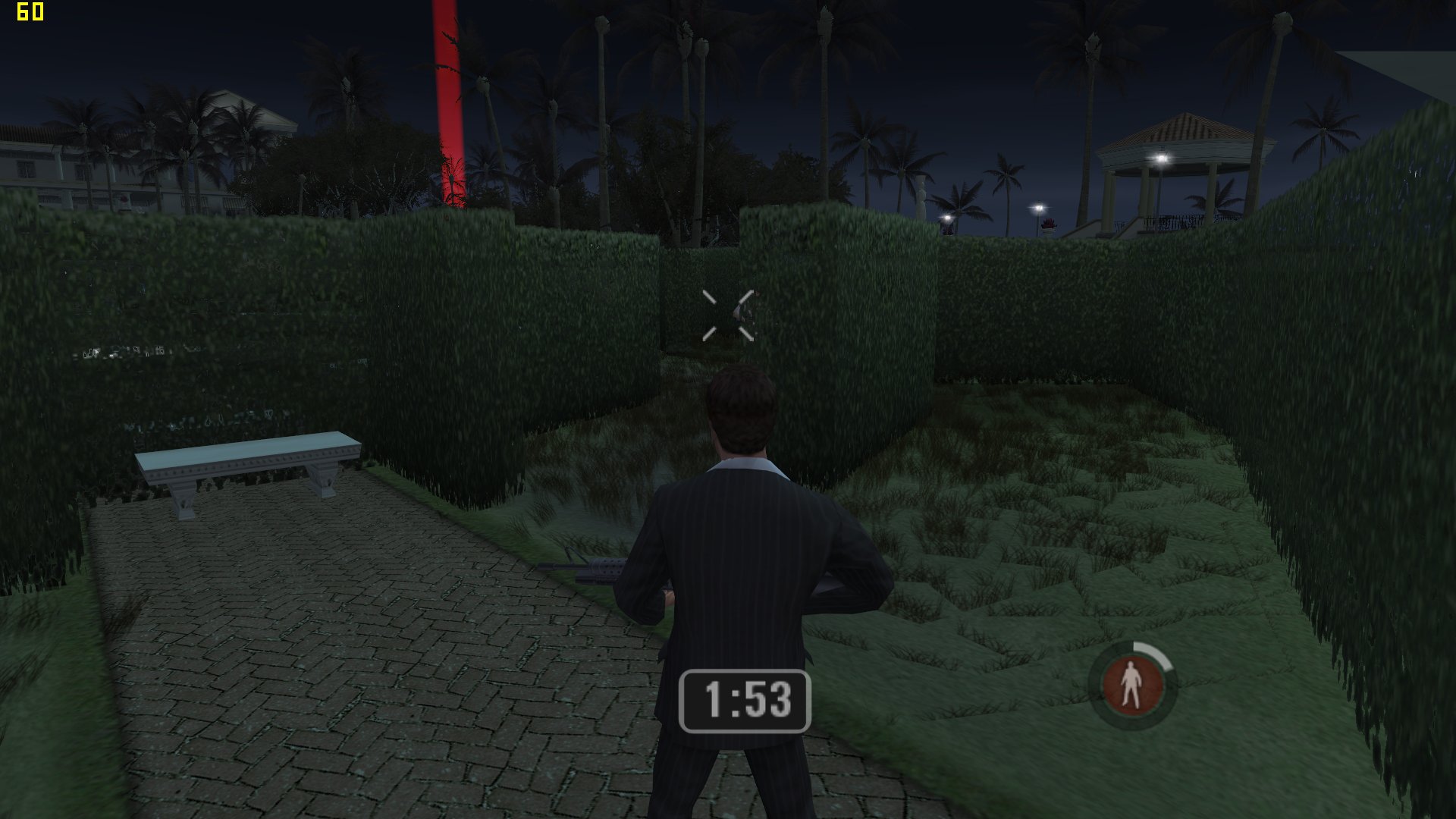 On top of that, I also identified the game was creating the D3D device with a multithreaded flag – which is said to degrade performance, and was absolutely unneeded for the game. Another performance gain!

Is there more we can do? Turns out, yes.

When testing these fixes, aap observed that the game ran really poorly on his PC – technically, it was full speed, but when driving around it’d hitch a lot. I also observed the same when debugging the game on a virtual machine, sometimes having the game pause for seconds at a time!

I checked it in a debugger, and much to my surprise, during those hitches the game spent a lot of time… releasing buffers! I fired up PIX and immediately noticed how happy the game is to create new buffers (and thus unload old buffers) when driving around: 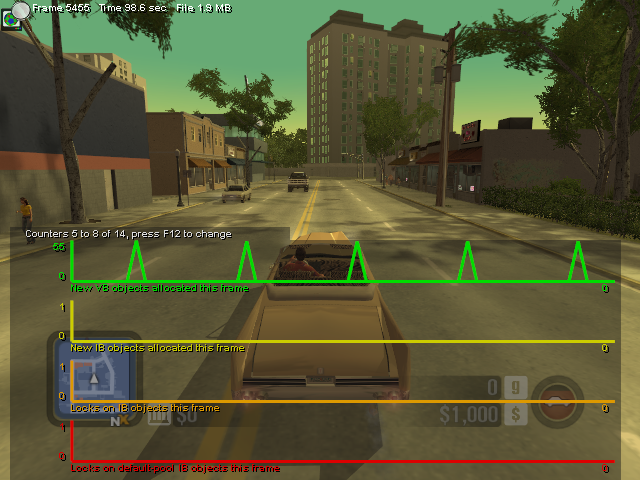 This is really unhealthy. There is no reason the game can’t reuse buffers instead of throwing them away and creating new ones. Luckily, the game has only two types of vertex buffers (static buffers in a managed pool, dynamic buffers in a default pool), and one type of index buffer, which makes the buffer cache relatively simple to implement. It looks like this game might really need it.

I settled on implementing a simplistic cache with the following behaviour:

I implemented the cache and ran the same test – it was really smooth in comparison for both me and aap! PIX graphs also looked much, much better now: 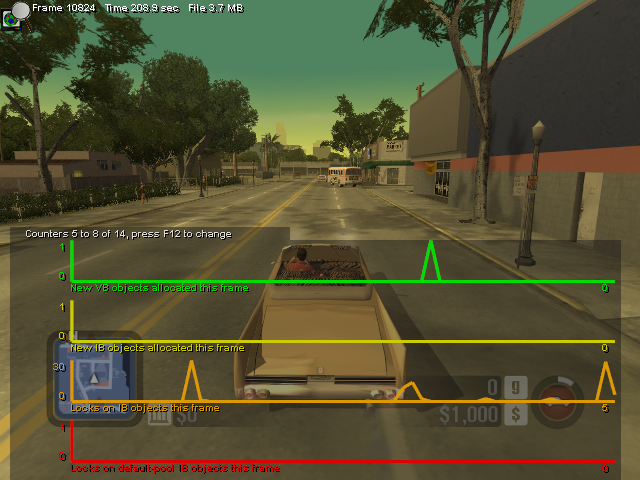 With this fix implemented, I finally was satisfied with the state of the game. Few final touches, and SilentPatch for Scarface is good to go!

Aside from the “exciting” fixes presented above, I also implemented a few more “boring” changes. The full changelog is as follows:

Head to Mods & Patches via the button below to download SilentPatch for Scarface. But before you do, stick with me for a bit longer!

Download SilentPatch for Scarface
Upon downloading, all you need to do is to extract the archive to the game’s directory and that’s it! When asked whether to overwrite files, select Yes.

Announcing Patreon – a new way to support me

Over the past few months, I’ve launched several new releases, and I tried to be fairly active on the emulation scene. As I became increasingly productive over this time, some people wished to see a new way to support my work, since GitHub Sponsors – although very nice – has too much friction for some people to start using.

With this in mind, together with the release of SP for Scarface I’m starting a Patreon campaign! Fear not, paid early releases are not happening – as of now, perks include:

This is not much, but depending on the response I might end up modifying the rewards a bit.