TL;DR - if you are not interested in an in-depth overview of what was wrong with the game and how it was fixed, scroll down to the Download section for a download link.

Disclaimer: This post was almost ready a few days ago and was supposed to be an analysis of QLOC’s patch together with a SilentPatch update. However, just before releasing I was made aware of several issues with Yakuza 5 and looked into them. This resulted in SilentPatch receiving support for Yakuza 5, which naturally delayed everything a few days. Because of that, this post now consists of two parts, with Part 1 being the “original” patch analysis and Part 2 being a Yakuza 5 release post.

It’s been a bit over three weeks since I released a SilentPatch for Yakuza 3 and 4 and around a week ago those games (together with Yakuza 5) received official patches. The majority of the changelog is shared across three games, with only Yakuza 3 receiving a single “exclusive” fix.

Let’s have a look at this shared changelog!

That changelog is… very similar to what SilentPatch brings! This means that the fixes I bring need to be re-visited, as they might be obsolete. While I’m at it, let’s also take a look at how QLOC fixed those issues!

In the last blog post, I identified several hot points causing the needlessly high CPU usage and fixed some of them. My approach had some side effects, though:

A quick test run with Special K (and without CPU usage fixes from SilentPatch) shows that the CPU usage is indeed significantly lower: 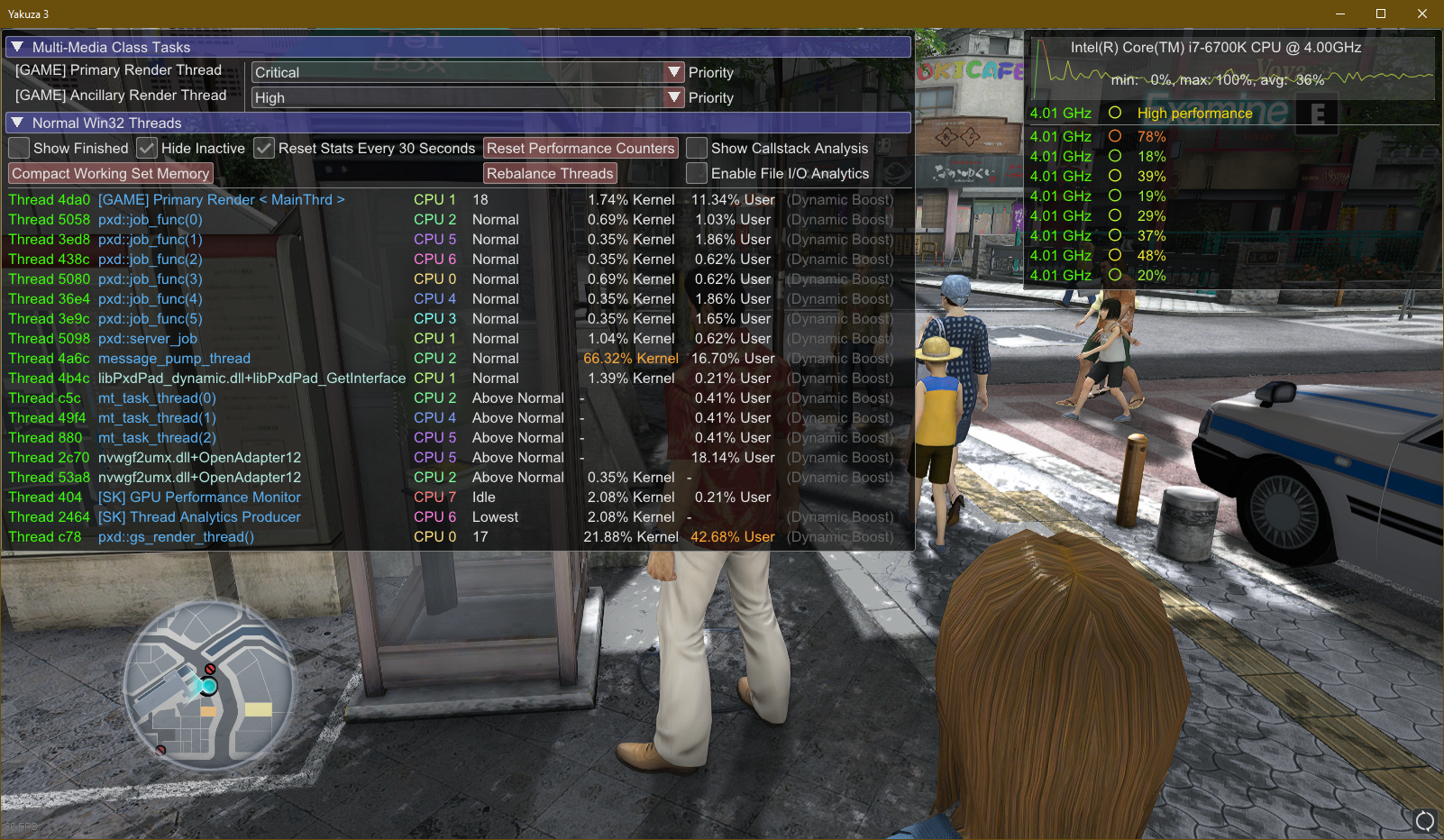 pxd::server_job thread is now reasonable with its CPU usage! A quick dive into the disassembly reveals that QLOC made this thread wait for jobs on a condition variable, whereas a pre-patch version periodically checked if it has any jobs to serve and slept otherwise. Great job (pun unintended)! That’s exactly how I would have solved this problem if I could reasonably hook up such invasive changes via SP… Well OK, I could have done it regardless – but since it would have required a lot of effort, I wanted to wait and see if it was going to be fixed officially. Turns out it was the right call.

With this change done officially, I was able to remove most of the CPU usage fixes SilentPatch introduced – this means that with an updated SilentPatch, loading times will not be longer anymore!

I did say I removed most fixes because QLOC did not identify one of the CPU hogs I found. As you can see on the screenshot above, message_pump_thread is still spinning even after the official patch. My fix still works as-is and relieves the CPU further in both Yakuza 3 and 4. Now the CPU usage looks exactly like I envisioned it to be when I started the first version of the patch! 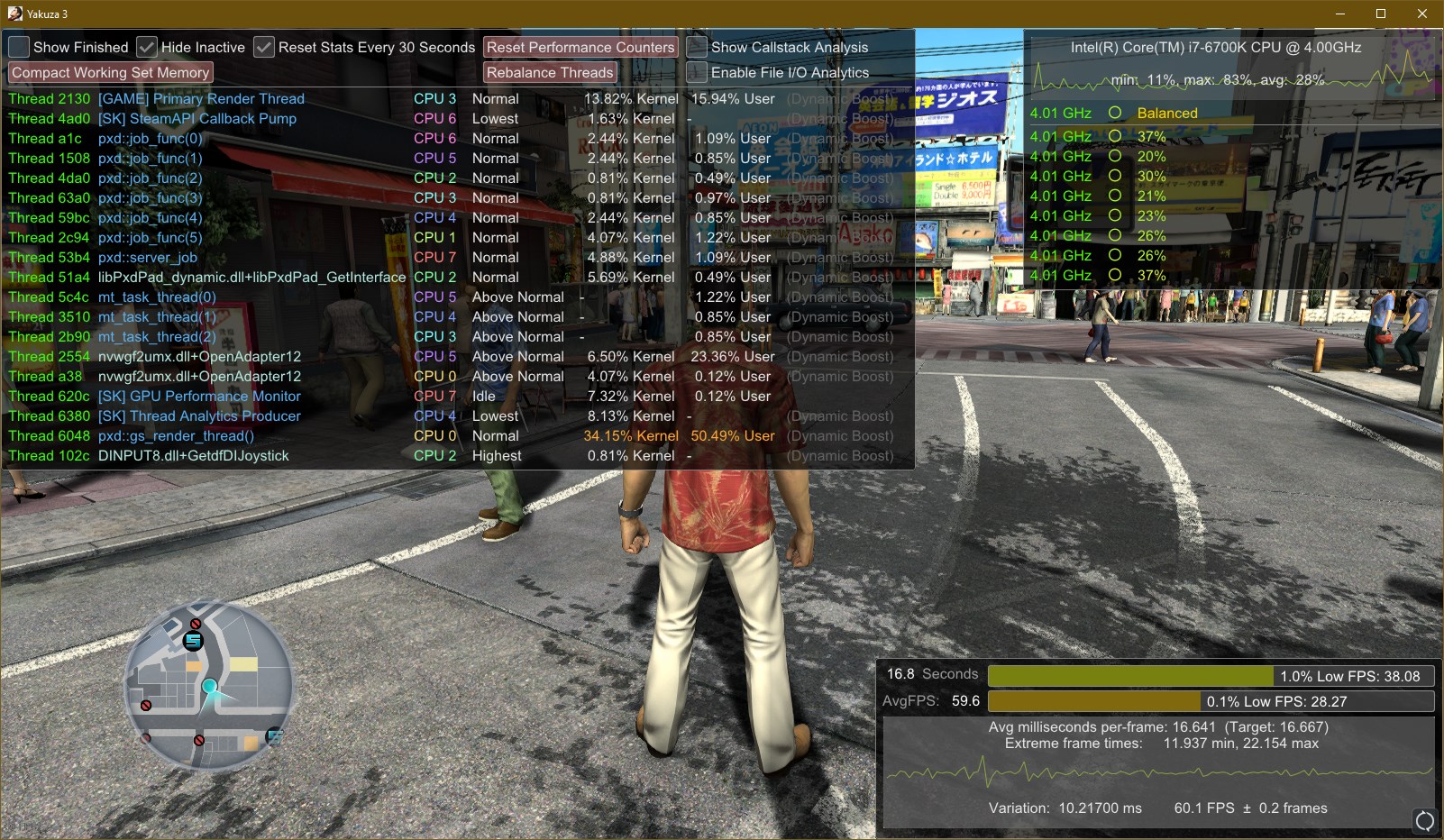 FWIW the fact QLOC did not include this particular fix also makes me confident that they did not investigate my patch when working on their fixes. While the code for all the other fixes is largely useless for developers with source access, this one fix could have been easily referenced in source code. It would make no sense for QLOC to reference the more “complex” fixes while leaving the lowest hanging fruit behind, so I am convinced they (sadly) are not aware of what I did.

When in the first release of SilentPatch I worked around the crash after finishing fights with a Heat Move/Head Action, I said:

…as a workaround I added additional parameter validation to the function, and… it seems to have helped! […] As for an official fix, I would hope QLOC performs an in-depth investigation of this bug

Additionally, I elaborated on that in the code comments:

Much to my disappointment, when I dissected a patched Yakuza 3 and checked QLOC’s changes to this particular function, they… seemed to have applied an identical workaround!

Coincidentally, it matches down to the same register usage.

Note – I did not verify if QLOC did anything else to fix this bug (admittedly, it would be hard to prove), but in my opinion the part I am aware of a rushed way to fix this issue. The real fix would not have touched this function in the first place, and instead, it would have fixed the bug leading to incorrect data being passed to that function. Or in other words, the patched function is merely a “victim” of some other place in code sending the wrong data.

Even worse, some people report those crashes have not been fully solved, so it’s possible that there is something else to that crash both me and QLOC missed.

In the first post, I outlined some of the issues I could not realistically fix. Sadly, out of all those only one thing got addressed officially. The rest still applies, so I’ll list it in hopes of bringing more visibility to those issues:

Just as I was wrapping this blog post, I was made aware of a bug seemingly only present in Yakuza 5:

Sounds familiar? Indeed, it’s a topic I’ve been covering more times than I’d want by now, yet again an example of a game not handling Unicode paths correctly. Thankfully, in the case of Yakuza 5, it’s not completely broken – only the photo booth functionality seems to be affected, as it saves photos to a separate user directory!

As always with issues like this, first I modified the game’s code to use fake paths to user directories, then used Process Monitor to log all IO calls, and sure enough, there it is – not all paths passed to the API are well-formed: 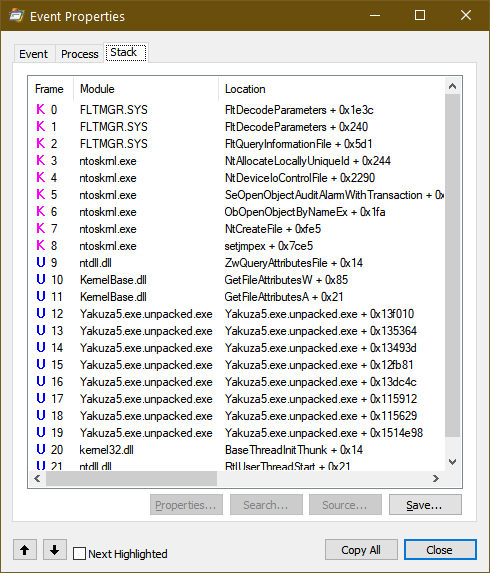 Process Monitor can even show what was the specific API call used and where did it come from. Insanely useful! In this case, I see the game made a call to GetFileAttributesA, erroneously passing a UTF-8 path.

Those fixes may have been a bit more overreaching than needed, but they work fine! Photo booths now work properly even with my weird debug user paths 🍪⟑η∏☉ⴤℹ︎∩₲ ₱⟑♰⫳🐱.

Is this everything? Obviously not! Just like Yakuza 3 and 4, Yakuza 5 likes hogging CPU threads a bit more than it should, although it does so in a different way than the first two games: 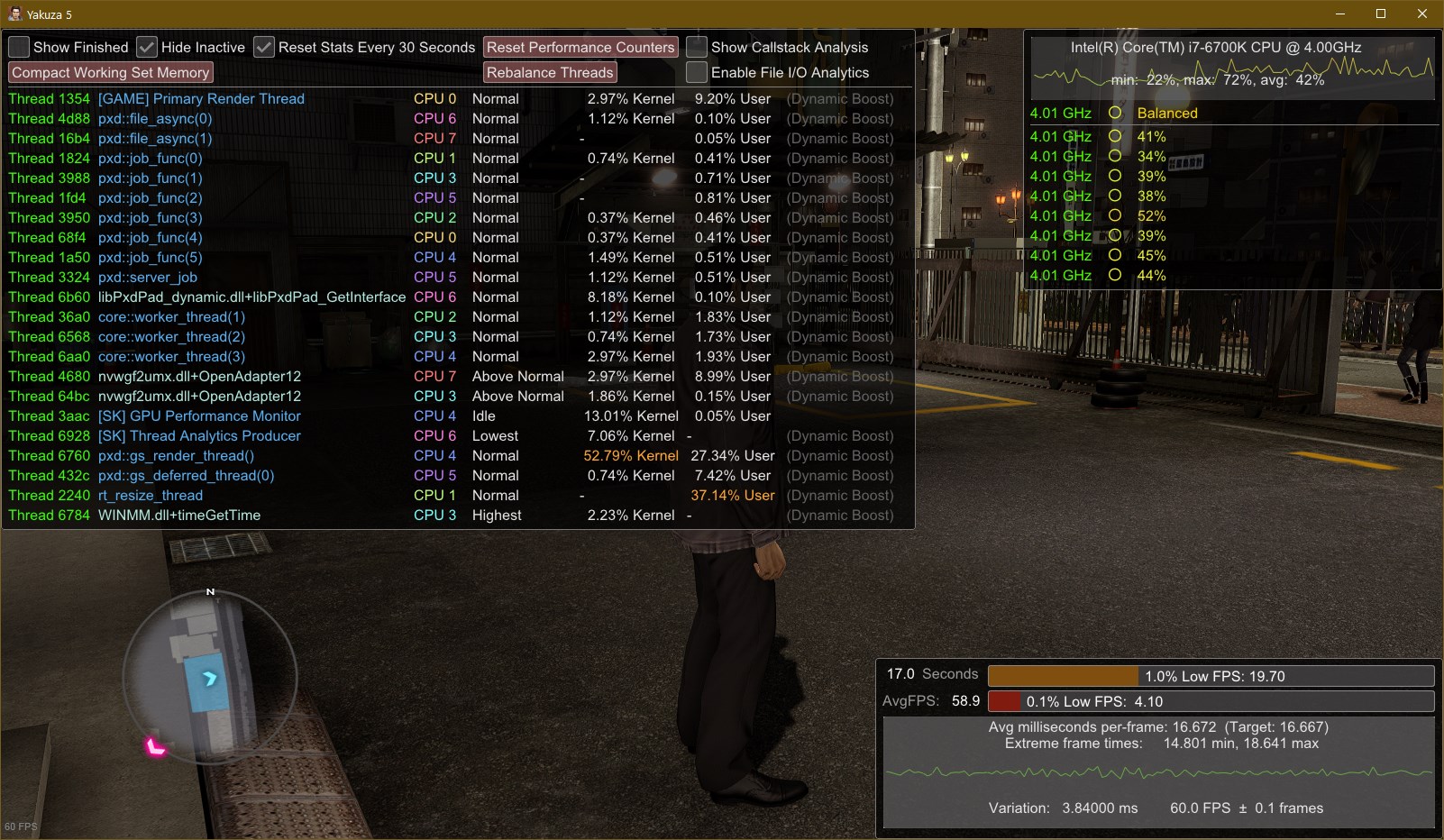 This time, rt_resize_thread is a culprit. What does it do when spinning? Not much – in fact, most of the time it’s endlessly looping on this tiny chunk of code!

Later on, I identified this thread as the one responsible for controlling the dynamic resolution feature. This makes the entire issue awkward – a feature which is intended to help maintain performance in GPU bound scenarios ends up contributing towards CPU bottlenecks by spinning an entire CPU core endlessly 😅 To make this even worse, even when the dynamic resolution option is disabled in settings, this thread still exists and still takes up CPU time!

Thankfully, I got lucky there. Based on my findings, I think this thread performs meaningful work only in two scenarios:

With this knowledge, I inserted an additional event wait to this hot loop and I signal it once on game startup and once when the boolean variable gets set. The result is greatly reduced CPU usage and dynamic resolution still working fine – in fact, rt_resize_thread now uses no resources and has vanished from Special K’s performance metrics! 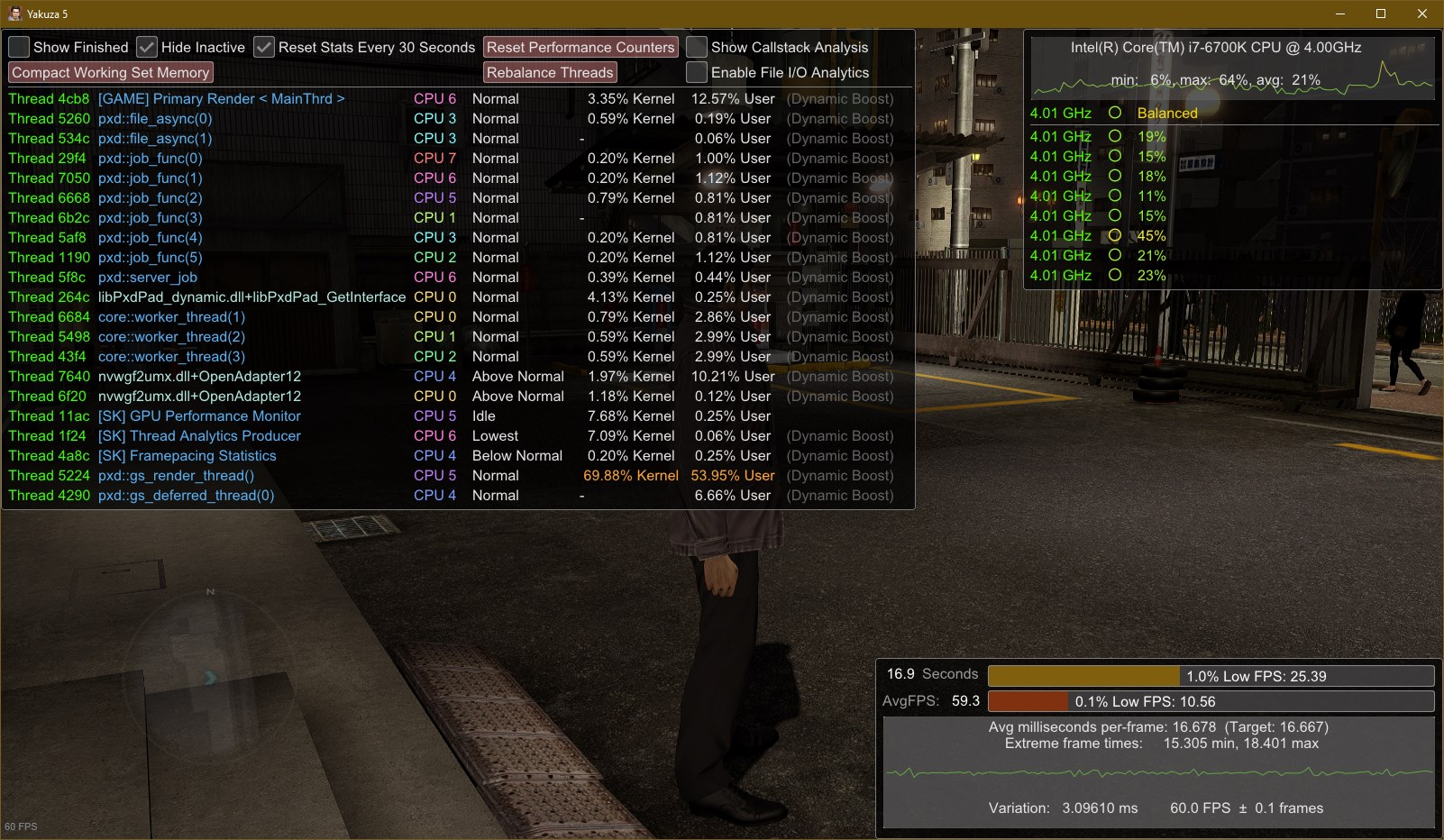 QLOC could (and should) have done the same. At this point I’m not convinced it will be patched officially, but… who knows?

The modification can be downloaded in Mods & Patches. Click here to head to the game’s page directly (the same download works for Yakuza 3, Yakuza 4, and Yakuza 5):

Download SilentPatch for Yakuza 3/Yakuza 4/Yakuza 5
After downloading, all you need to do is to extract the archive to the game’s directory, and that’s it! Not sure how to proceed? Check the Setup Instructions. Those patches only work with the Steam version of the games!

Virtua Fighter 5: Final Showdown Unlocker for Yakuza 6 and Yakuza: Like a Dragon