Today, I am looking into a niche Polish game – Kao: Mystery of Volcano, a third installment in the Kao series. Since Kao the Kangaroo: Round 2 is currently free on Steam and a new Kao game has just been announced, I think this is a great time to check this game out for the very first time.

I got my hands on the game (sadly it’s not on Steam), installed it, tried to open launcher.exe and… nothing. While the game itself doesn’t require the launcher and runs fine, it’s impossible to configure graphics settings from within the game. Therefore, the launcher isn’t mandatory, but it’s a welcome addition.

Surprisingly, a PCGamingWiki article for Kao 3 doesn’t mention this issue at all. What can we do about it then? Debug it, of course.

Before jumping to a debugger, I took advice from RibShark and inspected the process closely in the Task Manager. Of course, it’s there, uses no CPU time and memory stays at a constant low value. This hints that the process is stuck on something. We may be able to find out what it’s stuck on by using Analyze wait chain. This little dialog shows if the process is waiting for another process, and if it does – what process it’s waiting for. Sure enough, the launcher is waiting for… nvcontainer.exe. 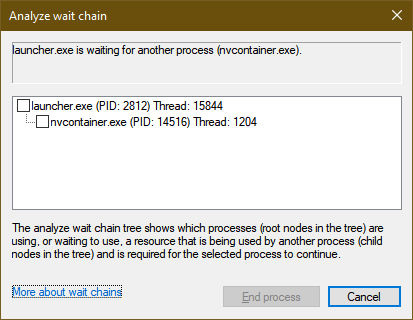 The issue isn’t about this one specific process, however – I’ve also seen it waiting for devenv.exe (Visual Studio) earlier, so it appears that for some bizarre reason, the launcher is waiting for random running processes.

Time to peek into the launcher’s code. I disassembled the executable and… good grief, its assembly code is convoluted and annoying to read, typical for executables created from Delphi. A quick peek into the binary with CFF Explorer confirms that theory, as it claims the launcher was built with Borland Delphi 4.0.

One of the first things the launcher does is perform two checks – they must both return false, or else the process terminates. The first check is obvious:

Interestingly, this string looks like a window name, but it’s been passed as a “class name” parameter – I don’t know if it’s intended or a mistake. Wrong or not, this function isn’t the one causing trouble.

The other function is much more interesting. It enumerates all top level windows and performs some actions on each of them, like this:

Why all this hassle?

Given that these two checks determine whether the launcher should run or just terminate in the background, they are here to allow for only a single instance of the launcher. It’s a simple concept – it only means that under no circumstances it should be possible for two launchers to run at once. Only the first attempt succeeds, then any next attempts just result in the application terminating before it shows anything for the user.

The launcher application tries to achieve this in two steps:

All this logic falls apart in point 2.2. Sending a message to a window via SendMessage blocks until the message has been processed by the target window! It’s easy to envision how this can fall apart – since the launcher happily broadcasts the message to all windows, it only takes a single window which will not respond in time. The code isn’t protected against this case, so any process with a window that doesn’t process messages all the time causes the launcher to hang, waiting for the answer infinitely.

There are a few ways in which we can improve this code, and I’ll present 3 of them. The first two are not optimal and you should not consider doing the same in your code. For a proper solution, stick around until the last suggestion.

Attempt #1 – wait with a timeout

Since the root cause of this issue is waiting endlessly, we could just add a timeout and consider the check failed if the response does not arrive in time:

Works? Works. Should you use it? No. It’s nothing but a workaround for root issue, which I’ll address in #2.

Attempt #2 – check who you’re sending the message to first

The WindowFunc function makes a very weird mistake which is easily avoided – it first obtains the class name and sends the “magic knock”, and then checks for the class name and the response. This doesn’t make sense neither in the code nor in real life – if one was to knock a “magic pattern” on somebody’s door, they would check if this is the right house before even attempting to knock, not when waiting for the response.

When laid out like this, the fix is trivial – split the checks:

This resolves the root cause – because the code will now only send messages to windows it knows, realistically it’ll never end up with a scenario where the window doesn’t respond. Problem solved!

However, is this the best solution? No.

Attempt #3 – what the customer really wanted

In software engineering, it is crucial to emphasize understanding what does the customer truly wants, or in this case, what is the precise intention of this code.

This code does not intend to allow for only one window with a specific name or class. The true intention is to allow for a single instance of the application. Even if the window has not been created yet, another launcher instance should not run.

The proper way to solve this problem is to have the launcher instantiate a named Kernel object. If we pick a unique enough name for the object, its presence unambiguously indicates that another launcher instance is already running! Object’s lifetime is bound to the process lifetime (if it’s not released explicitly earlier), so this is a fully bulletproof solution.

Scratch Foo and Bar functions – we can achieve a better result with way less code. It’s up to the programmer to pick a specific Kernel object to instantiate, but programmers commonly use a mutex:

I often see this functionality implemented by first trying to open an existing mutex, and creating one if it doesn’t exist. This is redundant – CreateMutex docs state that

If the mutex is a named mutex and the object existed before this function call, the return value is a handle to the existing object, and the GetLastError function returns ERROR_ALREADY_EXISTS.

Therefore, we can achieve the same with a single step, which also removes any possibility of a race condition between processes – in theory, such a race condition could occur if another launcher instance reached the OpenMutex step before the first instance created the mutex. Win-win!

This raises a question – will there be a SilentPatch fixing this? Right now, no – for two reasons: